Surgeons started removing strange growths from Mark Crosbie’s body a few years after he came home from Vietnam. Over the next three decades, they took sebaceous cysts from the Navy veteran’s back, and one from his elbow. They removed a growth that had spontaneously developed under the skin of his left cheek and abscessed. They performed fistula removals too painful to discuss.

Two of the surgeons asked Crosbie if he had served in Vietnam. But they wouldn’t elaborate when he asked why they seemed to associate the cysts with his tour in Southeast Asia.

As a result, Crosbie didn’t pursue a connection between his health problems and his service until he went to VA for help with his type 2 diabetes in 2003. The first VA doctor he saw told him she suspected he’d been exposed to Agent Orange. She insisted he receive an evaluation from an environmental medicine specialist and file a claim.

By that time, Crosbie suspected his cysts and his wife’s half-dozen miscarriages were related to herbicide exposure during his 20-month tour on USS Lloyd Thomas in and around the waters of Vietnam. He couldn’t apply for federal benefits for either health problem, since VA doesn’t recognize them as Agent Orange-related illnesses. But he could file a claim for type 2 diabetes and neuropathy.

“That’s when I started running the gantlet,” Crosbie says. 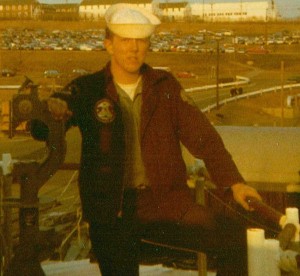 VA rejected Crosbie’s claim twice over the next six years. He’d never stepped foot in Vietnam, and therefore didn’t meet the “boots on ground” requirement for Agent Orange disability benefits. He also couldn’t find records to prove that his ship had sailed up a Vietnamese river on a covert mission in December 1970. That would have made him a “Brown Water” veteran – someone who had spent time in Vietnam’s inland waters, which VA acknowledges were contaminated by Agent Orange.

Crosbie had given up, when he connected with shipmate Charles Yunker, adjutant of the Legion’s Department of Kansas, online. Yunker was trying to prove that Lloyd Thomas had been on that covert mission on a Vietnamese river as more and more of its crew contracted cancer and other illnesses tied to Agent Orange exposure.

With the help of the ship’s navigator, Mike Balog, damage control officer Rick Hokans, deck division officer Bob Moore, and John Delgado of the Australian Special Air Service, who was on board during the mission, Yunker was able to establish that Lloyd Thomas had anchored in the heavily contaminated Gành Rái Bay and Saigon River estuary in late December 1970. That, along with evidence from the ship’s deck logs, qualified Lloyd Thomas for VA’s list of Brown Water ships. 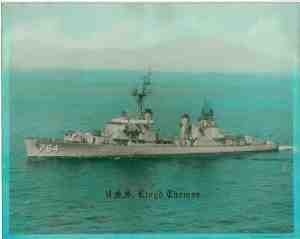 “Legion to the rescue,” says Crosbie, a member of Alberton W. Vinal Post 313 in North Chelmsford, Mass. “Without Chuck and the Legion, I and all my shipmates would have been left out in the cold.”

Crosbie’s battle is typical of what Vietnam Navy veterans endure when they file claims for the cancers, type 2 diabetes and Parkinson’s disease linked to Agent Orange. The Agent Orange Act of 1991 provided benefits for all Vietnam veterans with diseases caused by the toxic herbicide. But the Bush administration changed the rules in 2002 so that only veterans who can prove they stepped foot in Vietnam or sailed on Vietnam’s inland waters qualify. 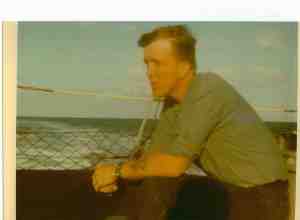 Mark Crosbie served aboard the USS Lloyd Thomas from 1969 to 1971, including a tour in the waters of Vietnam. (Photo courtesy of Mark Crosbie).

Proposed new legislation to restore Agent Orange benefits for Navy veterans who were on ships operating within 12 miles of Vietnam during the war won’t simplify the claims process, says Jeff Davis of the Veterans Association of Sailors of the Vietnam War.

Under H.R. 3612 – the Blue Water Navy Vietnam Veterans Act of 2011 – many veterans will still be forced to find the deck logs in the National Archives or Navy archives that establish that their ship meets the criteria for exposure. That’s an undue burden that puts claims out of reach for most of them.

The legislation also faces considerable hurdles. “I think our real challenge right now is maintaining the benefit we have,” says Sen. Patty Murray, D-Wash., chairman of the Senate Veterans Affairs Committee. There was an effort last summer in Congress to limit Agent Orange benefits. “We beat that back … but the people who believe that we should not be funding (Agent Orange benefits) are going to be back at us, particularly in tight budget times.”

Vietnam Navy veterans also continue to run into problems at VA, which has not, as of this writing, provided information requested by Sen. Daniel Akaka, D-Hawaii, on the number of Brown Water cases it has reviewed. Akaka asked for the review in September 2010 after his staff discovered that VA had rejected claims from 16,820 Vietnam Navy veterans without reviewing ship logs or other evidence showing that the veterans had served in areas that may have been exposed to Agent Orange.

In April 2011, VA officials said that about 6,700 cases had been reviewed and 20 ships added to the Brown Water list.  VA says it cannot provide an estimate of how many additional cases it has reviewed since last year because of the significant growth in all claims, including Agent Orange cases. The agency also would not estimate when it will complete the review of mishandled Brown Water cases that Sen. Akaka requested nearly two years ago.

Other members of the Lloyd Thomas crew, meanwhile, are now pursuing claims. Crosbie warns that they should be prepared for a long and frustrating process – one that, in his case, eventually ended in victory.