Restorative Justice: Veterans treatment courts make differences in the lives of those who served

Glenn Slocum faced as much as 25 years to life after his arrest in late 2010 for stealing food and diapers. The Marine Corps veteran had two previous felony convictions for robbing stores, one in the 1970s and one in the 1980s. Petty theft was enough to put him behind bars for good under California’s three-strikes law, he was sure.

But when a judge learned that Slocum had served in the military, he sent him to Santa Clara County Veterans Treatment Court in San José instead. There, Judge Stephen Manley pushes Slocum and another 150 former servicemembers to undergo counseling, get clean and sober, and find a job or go back to school.

“I’m finally clean, and I love it,” says Slocum, who first developed a cocaine addiction in the 1980s. “I’m hooked up with the (VA) mental health clinic. I have a relationship with a beautiful woman who’s setting an example for me. I created my own little business last year.”

San José’s veterans court is one of more than 80 specialty courts across the country that rehabilitate former members of the U.S. military, instead of leaving them to fend for themselves on the streets or tossing them behind bars. Judge Robert Russell started the first veterans treatment court in Buffalo, N.Y., in 2008.

Based on Russell’s model, veterans courts are a blend of mental health programs and drug treatment courts that have successfully reduced recidivism rates and lowered costs in the criminal justice system for nearly 20 years. They reduce the social costs of post-traumatic stress, alcohol abuse and other consequences of combat, according to judges, prosecutors and others involved with the courts. They also connect veterans to the benefits they’ve earned through their service, often with the help of American Legion service officers.

Veterans treatment court programs run as long as three years. Graduates can have their charges reduced or their criminal records expunged, depending on the rules of the individual court. “It’s a cost-effective approach for helping veterans,” says Matt Stiner, a Marine Corps veteran and director for the nonprofit Justice for Vets. “It solves a lot of the problems of homelessness, substance abuse and mental health disorders.”

“Judge Manley Wants You to Succeed,” declares a sign at the back of the courtroom, which is housed in a former factory. He opens every session by reiterating that message. Then he reminds everyone of the rules: stop using drugs and alcohol, stay in treatment, be polite, don’t run other people down.

“The final rule,” Manley says, leaning forward as if to add emphasis, “I don’t like excuses. I like the truth. The more honest you are with me, the less time you will have to spend in jail.”

Manley knows whether or not defendants are straight with him. He meets with the district attorney, the public defender, VA representatives and treatment staff to assess the progress of each veteran a few days before his court appearance. That includes reviewing reports from doctors, substance-abuse counselors and probation officers.

On court day, defendants come forward one at a time. Each takes a seat at a table with the counselors and therapists who are part of Manley’s team. A half-dozen VA psychologists, social workers and benefits counselors also stand by to help defendants connect with VA treatment programs and find subsidized housing and other federal assistance.

Manley engages each veteran with questions specific to his or her circumstances. Did you get your medication refilled? Why aren’t you in treatment? Do you need help with transportation? The judge reviews the number of substance-abuse rehabilitation meetings each veteran is attending. He tracks the community-service hours performed, and takes note of any domestic violence, anger management or PTS programs they complete.

Manley doesn’t automatically kick out defendants who fail drug tests. “We’re a more therapeutic court,” he says. “We will go to far greater lengths to get people to succeed.”

Manley also encourages veterans to talk to him about their needs and problems. Several inquire about help with housing. Manley turns to a VA representative, who says that subsidized housing vouchers are again available. “She will help you,” Manley tells the veteran.

When Slocum comes forward, Manley asks him about the home-exterior business he has started – a one-man power-washing, landscaping, painting and handyman operation.

“Are you having challenges?” Manley asks. “Is it the weather?”

Things are slow, Slocum says. He expects spring will be better. “You are going to lots of meetings,” Manley says with encouragement. “Keep up the good work.”

Slocum is assigned his next court date, and the courtroom is filled with applause in accordance with another Manley rule: “Clap for everyone, whether this is the beginning or the end, whether people are doing well or not.”

To Stop the Cycle

Manley created the Santa Clara County Veterans Treatment Court in November 2008 after seeing a long line of former servicemembers cycle through the criminal justice system and end up living on the streets because they weren’t getting treated for substance abuse and PTSD – or because they dropped out of treatment.  “One way you stop recidivism is to treat people,” Manley says. “That’s why these courts work. I don’t allow people to drop out.”

Manley also makes certain that veterans always have treatment options. If there isn’t room in a VA facility in Santa Clara County, veterans are sent to VA facilities in neighboring counties. If defendants don’t qualify for VA health care or don’t want to deal with VA, Manley sends them to the county’s treatment programs.

Demand for veterans courts nationwide is growing. But it’s difficult to expand the program, given VA’s limited resources. The federal government will have to provide additional funding to meet the surge of demand from returning Iraq and Afghanistan veterans, Manley says. ” If you are going to spend money for wars, you are going to have to invest in re-entry and treatment for returning veterans,” he adds.

The Santa Clara County court differs from other veterans courts in one important regard. Manley accepts all veterans, no matter the terms of their discharge, their crime – about one-third are charged with violent offenses – or whether they served in combat. “You don’t decrease recidivism when you deny services to people who need help,” Manley says. “If we don’t address it now, are we going to wait until there’s another crime? That doesn’t make sense.”

Four hundred miles to the south, the Orange County judicial system takes a more restrictive approach. It requires that a defendant’s alleged crime be tied to military service – for example, a consequence of PTSD – for them to qualify for veterans court. That generally means that a defendant cannot have a criminal record prior to joining the military.

Nevertheless, the program has made a significant difference for veterans who had all but given up on their lives. Take Jacklyn Gebhard, the first female defendant in the Orange County Combat Veterans Court.

Gebhard doesn’t talk about the incidents that drove her to heroin addiction. Suffice it to say that the former Air Force military policewoman was so down and strung out that even the bookstore security staffers who busted her for grand theft in April 2010 tried to persuade her to get into a recovery program.

“There were a lot of things going on in my life, and I didn’t know how to deal with it,” says Gebhard, who was stealing CDs and DVDs to support her drug habit. “I needed to use heroin in order to wake up in the morning. I needed to use in order to be normal the next day.”

Gebhard kicked heroin in jail, and she’s getting her life back through veterans court. The court sent her to inpatient drug rehabilitation and helped her find housing after she completed that program. She still attends outpatient drug rehabilitation and enrolled in an all-women’s sexual trauma treatment program at the Long Beach VA Medical Center, to deal with events she says occurred while she was in the military. She will not elaborate, focusing instead on the fact that she’s now a straight-A college student with plans to get a degree in social work and help other veterans.

“I’m proud of her,” Moore says. “I feel fortunate to have her assigned to me.”

Treatment courts often recruit veterans such as Moore, who served as an Army nurse in Vietnam, to mentor former servicemembers who get into trouble. Volunteers from The American Legion, Vietnam Veterans of America and other veterans service organizations are a significant part of the effort.

Moore has coffee, lunch and frequent telephone conversations with Gebhard. She is also the first person Gebhard called when she was wrongly arrested for allegedly being under the influence. When it looked like she would go to jail while the judicial system sorted out the situation, Moore gave her a hug and told her, “I don’t know what’s going to happen, but I believe you.” A blood test showed that Gebhard was clean.

“It felt good to have someone believe in me and have my back,” Gebhard says.

Like many veterans, Gebhard was wary when she first heard about veterans court. Today, she’s enthusiastic. “I have a place to live,” she says. “I’ve started to trust people. I’m building relationships. The best thing is, I’m alive.”

Veterans credit the success of these specialized courts to the attitude and understanding of judges who oversee them. “I thought I was going to get locked up – I gave them a dirty test,” says Harold Thomas, a Vietnam combat veteran who didn’t realize he had PTSD until he landed in veterans court three years ago for possession and use of methamphetamine. “Judge Manley told me to keep trying. He said, ‘It doesn’t do you any good to be in jail.’”

“This was a good birthday present,” Thomas said as he left the court. 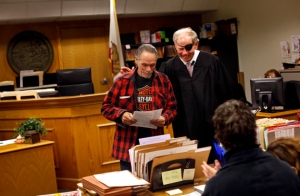 Eric Norton, meanwhile, is surprised by the amount of individual attention he receives from the court. “I didn’t know I would come here every month and work on my problems,” he says. Norton’s problems included a domestic violence charge for an incident he does not remember.

“I had a flashback and blacked out,” says Norton, who served in Iraq and Afghanistan with the Marines. “To any cop, I’m a psycho. The judge is like, ‘OK, you’ve had a flashback. You’ve got to get into counseling.’”

Norton has had difficulty getting VA treatment for his PTSD because he got into a fight with an MP near the end of his Marine Corps hitch and received an other-than-honorable discharge. His wife died of liver failure last June, leaving him a single father of their 2-year-old son. Manley’s team helped find child care so that Norton could keep his job as a sheet-metal worker and attend anger management counseling. They also found an advocate to work on getting his discharge upgraded. “It’s a different mindset,” Norton says. “Judge Manley takes a lot of the stress off.”

Slocum, meanwhile, is looking forward to expanding his home-exterior business when he graduates from Santa Clara County Veterans Treatment Court. “I plan to get married,” he says with a proud smile. “I’m in a church now, and I’m really digging it.”

“I’m finally happy,” he adds. “What little I’m doing now is so much more than what I was doing before.”

This story appeared in the July 2012 issue of The American Legion Magazine. All photos by Sarah Rice Photography