From Marine Corps Air Station El Toro in California to Fort McClellan, Ala., there are nearly 140 U.S. military bases on the federal government’s roster of toxic waste sites.

This is a significant issue for veterans, says Jim Deremo, The American Legion’s department service officer in North Dakota. The drinking water was polluted at many of these bases. “I think a huge number may be suffering from health problems because of their exposure to these chemicals,” he says. “The whole issue has been and continues to be a well-kept secret, so not many veterans know about it.”

In 2010, a county veterans service officer asked for Deremo’s help with the case of a Marine stationed at El Toro in the early 1950s. Ray Alkofer was suffering from a nervous system disease called multiple system atrophy. “Essentially, his body shut down and he was bedridden for quite some time before he passed,” Deremo says. “There’s no question Ray’s illness was caused by his exposure to all of the chemicals at El Toro.” 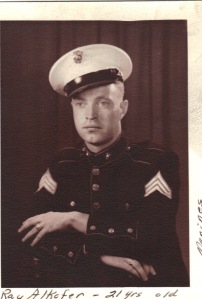 Ray Alkofer as a young Marine

The Navy identified more than two dozen potentially contaminated areas, including landfills, underground storage tanks, pits where jet fuel and paint thinner were burned for firefighting practice, and aircraft hangars where solvents such as trichloroethylene (TCE) were dumped.

Alkofer served at El Toro from 1951 to 1953, says his widow, Laura. Although his official job was in communications, he also cleaned airplanes and did other work around El Toro’s hangars. After his discharge, he came home to North Dakota and worked for the railroad and the telephone company.

Alkofer started experiencing medical problems in 2000, and went from being active in his community to bedridden. “You name it, he did it,” Laura says. “Community theater – he was in every musical. He was an EMT and a member of the fire department for 25 years. He was active in American Legion Post 147, Lions Club and Knights of Columbus.” 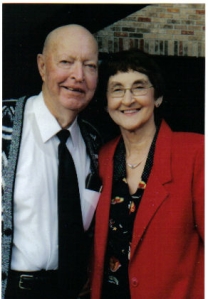 With Deremo’s help, Alkofer filed a VA claim based on his exposure to toxins, but it was denied. “I was ready to give up,” Laura says. “Jim said, ‘No, we’re not going to stop.’” They appealed, and Alkofer received a 100 percent disability rating in March 2011. He died seven months later.

“The last year of his life was sad for him,” Laura says. “It bothered him that he’d been exposed by the Marine Corps.”

A few months later, Deremo was helping file a claim for Richard Bounds, who served at El Toro from 1974 to 1976. Bounds says he became so ill while building a fence around a vehicle dry dock that he requested barracks duty.

Bounds first developed serious organ failure about a decade after he left El Toro, even though he has no family history of such medical problems. That led to kidney and liver transplants in 2007. Bounds’ VA claim was approved late last year, thanks to Deremo and Steele County veterans service officer Dennis Kubischta. Bounds also now has a 100 percent service-connected disability for toxic exposure.

Veterans who served at other contaminated bases haven’t fared as well. Sue Frasier has been unsuccessful in her fight for a national health registry for veterans who served at Fort McClellan between 1935 and 1999. Frasier went through basic training in 1970, when the base was home to the Army Chemical Corps and the Women’s Army Corps. Nearby Anniston had a chemical plant that manufactured PCBs.

“Nobody told us about the contamination level,” Frasier says. “There were factories all over America in those days – it was hard to get a sense of the danger.”

Frasier developed respiratory and gastrointestinal problems as well as chloracne while on active duty. Chloracne would later be one of several diseases tied to Agent Orange exposure.

Frasier’s health problems continued after her discharge in 1972 and forced her to retire from her civilian job at 41. VA rejected Frasier’s disability claim several times. She sold her car, her house and her furniture to pay her bills, she says.

Today Frasier runs the Fort McClellan Veterans Stakeholder Group. At her urging, Rep. Paul Tonko, D-N.Y., has introduced legislation to create a national health registry for veterans whose medical problems may be related to chemical exposure during their service at Fort McClellan.

“We want a universal notification form, sent out on Army or VA letterhead, telling veterans the truth about where they were stationed,” she says. “Something with substance, that includes a detailed account of what they were exposed to. Veterans should not have to rely on public rumors, Internet activists and storytelling to find out what happened at Anniston, Ala.”

This story first appeared in the February 2013 issue of The American Legion Magazine along with stories about decades of toxic exposure at Camp Lejeune, N.C.